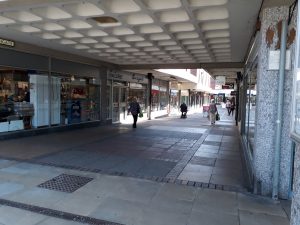 renewed activity about developing Churchgate and the surrounding area, we have revised the Timeline to show what happened when

1971 –  Churchgate built; described at the time as a “space age development to keep up with Luton and Stevenage”.  Part of the overall plan was a new home for Hitchin Market.

1989 – Hillier Parker retail appraisal of District found the Market was a major draw for Hitchin.

1992 – Harris Research surveyed public perceptions of the town, environmental improvements and the market.

1993 July – Local Plan No.2 adopted; Churchgate identified as an area for redevelopment.

1996 April – Local Plan No.2 with Alterations adopted; Churchgate reconfirmed as area for redevelopment.

1996 May – NHDC Policy & Resources Cttee agreed public consultation prior to Guidelines being prepared for Churchgate area from Portmill Lane to Bridge Street.

2002 – 2003 – four draft Town Centre Strategies produced by NHDC; first three opposed by community on grounds that expansion out of scale & market displaced; protest in form of petition of 10,000 & march around town centre with rally.

2008 – HM obtain renewal of planning consent of 2000.  HM research showed Churchgate could not be significantly increased in size for planning & legal reasons.

2010 – NHDC sign development agreement with Simons (would receive a 250-year lease of 7 acres of land in the town centre, and were obliged to produce a planning application within 3 years – by March 2013).

2011 – English Heritage see little merit in the proposal emerging at Churchgate. “Simons scheme appears to have been generated by a wish to impose in Hitchin a standard & frankly alien retail development”.

Nov 2012 – NHDC Cabinet set to extend Simons contract for 6 months (then requested to 18 months, but if that were done there would likely be no actual end date).

Jan 2013 – Simons hold exhibition (~45 people agree with proposal, out of ~90 who completed forms, so Simons say that 50% of Hitchin residents support the scheme) and that they need an extra £2M from Council.

July 2014 – Full Council confirms decision of July 2013 & agrees £10,000 for procurement of advice on Council’s ability to enter into exclusivity agreement with a developer who has obtained planning permission.  No further budget until planning permission obtained.

November 2014 – based on advice from Eversheds, NHDC abandons Churchgate Planning Brief approach so as to consider smaller scheme in short term.

February 2015 – Full Council agree £40,000 for independent valuation of site & necessary legal & commercial advice; 150-year lease can be granted upon completion of any agreed redevelopment; all developers must seek solution for Market at own expense; continue to investigate smaller scheme.

February 2019 – Full Council (minutes awaited).  NHDC agree in principle to purchase leasehold interest; any regeneration must maintain return to the Council; officers to continue range of potential solutions; officers to assist with Future High Streets (FHS) funding application by Hitchin Initiative & any others that come forward in the District (only one scheme in North Herts can be submitted).