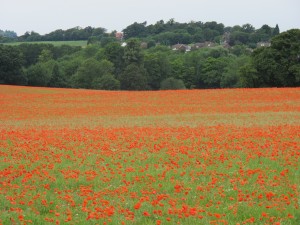 of full Council on Wednesday 20th July, NHDC adopted the Draft Local Plan by 32 to 7 with 5 abstentions. The DLP can be found on the NHDC website here.

The meeting was long, and many councillors made their reservations clear before reluctantly giving their support. There was general agreement that a flawed plan was better than no plan at all, which would run the risk of government intervention. That would lead to imposed (and likely higher) housing targets, and open season for developers.

Hitchin Forum’s Planning Group, in a letter to councillors sent the day before the Council meeting, expressed concern about a number of issues from a Hitchin perspective. We said –

We are aware that you will be discussing the Draft on the evening of 20th July.

At Hitchin Forum we have been able to hold a meeting of our Planning Group, and we thought it would be worth sharing some of our immediate responses. These have yet to be discussed with our full membership, but we think they could be useful as you consider the possible conditions you might like to place on any agreement at Full Council that the Submission Local Plan (SLP) should proceed.

We are aware that not all the SLP itself or the supporting documents are as yet available. However, it is unclear whether the Plan will include a set of clear objectives for the District and the main towns, and an overview of how they could be functioning sustainably in 2031. Without these it will be difficult to judge where we are heading or monitor progress. We hope you will stipulate that these should be part of the final documentation.

We are very concerned that, despite its potential for regeneration as an employment area, the Wilbury Estate in Hitchin is not mentioned in the draft documents. The area has been constrained since the 1996 Local Plan by lack of proper access, and the quality of life in the town is severely affected by lorry movements. We hope that you will stipulate that the results of any access study should be made public and acted upon to help the District’s economy and environment.

The two proposals for additional retail in Hitchin are either so vague (Paynes Park) or so detailed Churchgate) as to be unhelpful. In relation to Churchgate the Heritage Report seems to be working to a brief that expects the entirety of the site to be covered with buildings.  We are very concerned that such documentation could be misused to justify a very large development which pays little regard to the needs of the Market or the incremental growth of the town. We hope that you will urge that it is for the SLP to do no more than identify the area as one of opportunity for retail and mixed uses, to be developed in a highly sensitive setting.

We have found the Housing and Green Belt paper helpful, and understand the pressing need for more housing in the District, and the exceptional circumstance in which some loss of Green Belt is needed. We are pleased to see the continued emphasis on affordable housing. However we have concerns regarding the sites east and west of Hitchin:

We hope that you will stipulate the need for a Masterplan for all Strategic sites, and flag up the other concerns that Cabinet will need to review in September with the full documentation. We hope that for the longer term, the Council will agree the appropriate funding to enable continued studies on a new settlement and liaison with other local Councils.

We anticipate that there will be more information and policy material on these subjects in September. However, we are concerned that transport schemes seem to be concentrating on changes to junctions that will be expensive and unlikely to reduce long term congestion, when there are schemes such as those for industrial and local access that will achieve more. And we have not been able to identify any material that addresses the issues of noise or air quality (of considerable local importance given the lack of improvement in air quality after 3 years of the implementation of the Stevenage Road Action Plan, and the deterioration of air quality near the library necessitating a second Action Plan for that area). We hope that you will urge that such matters, along with issues such design quality and housing standards, need to be fully addressed in the final SLP documentation.

At our Members’ meeting on 27th July, Adrian Gurney and Ellie Clarke presented their analysis of key sections of the Strategic Policies document – click here. A more detailed account of the main concerns expressed at that meeting will be available on the website later.

The Local Plan will be discussed by NHDC Cabinet in September and there will be a further public consultation in October and November.