The next stage on the consultation for improving Bancroft Recreation Ground is to comment on the plans revealed on Jan 11th by BDP, the designers employed by NHDC. They are seeking views but the deadline draws ever closer – there is a Council Cabinet meeting on January 28th which will effectively approve the submission to the Heritage Lottery Fund, and the deadline for that is February 28th. 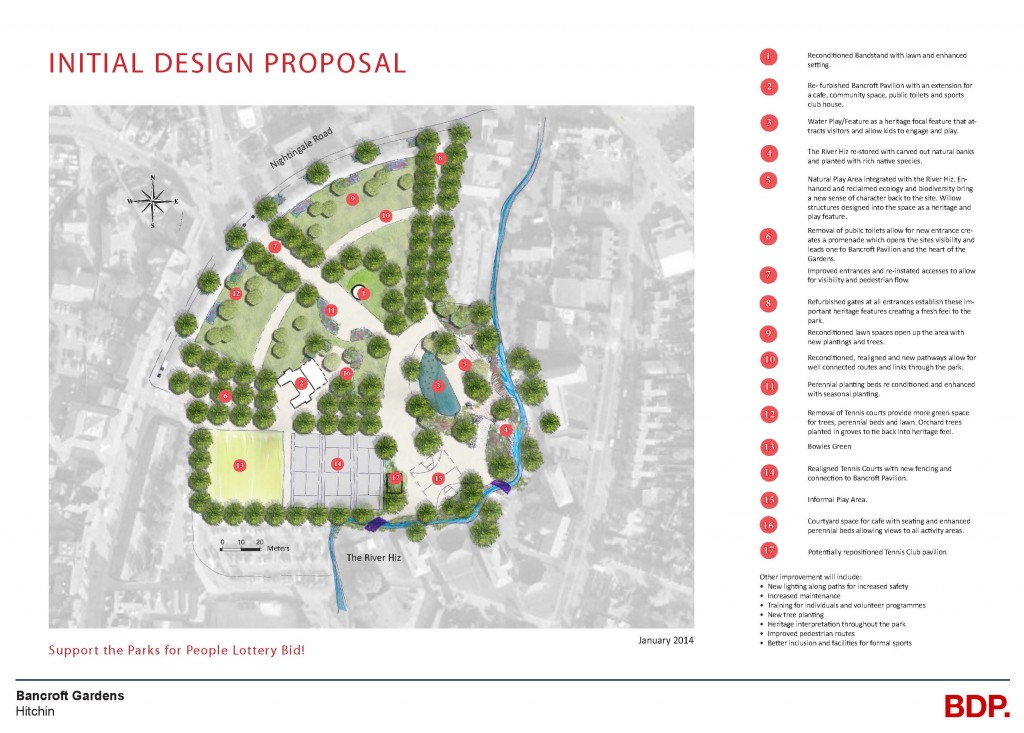 This is also on the BDP Bancroft website here. Note that number 13 should say Bowls, and not Boules (gremlins get in everywhere).

A meeting to discuss the plans with BDP staff was held on Monday Jan 13th at Bancroft Pavilion – organized by the Bancroft Users Group and Supporters (BUGS) a mixture of bowlers, tennis enthuisiasts, hall users and Hitchin Forum.

BDP presented their “Initial Design Concepts” and explained that the plans are their first suggestions and would be refined if the bid for Heritage Lottery funding succeeds. Bids are submitted by Feb 28th 2104 and decided on in June. A detailed final plan is then drawn up and submitted by February 2015 for the main Lottery grant to be applied for. If that is passed in June 2015 then work can proceed.

The main new idea is that the river area should be opened up and the play area extended. The most controversial consequence of that is the suggested move of the tennis club’s courts toward the upper bowls green. The plan has space for only 3 courts in total – a reduction from the current 7 on the Rec – with no clear plan for how any public access to courts could be arranged.

There is only one other open public court in Hitchin – at King George Playing Fields – and removal of the four courts currently in use is something that all Hitchin residents would lose. Many people have talked about how they have taken their children there to play and there are many reports of how much the public courts are used in Summer.  However these are just casual users, they are not an organized group, and their voice has not been heard.

The tennis club is understandably anxious (and somewhat angry) about what they see as a threat to their very existence, and by the loss of their investment made in good faith . They thought a renewal of their lease with NHDC had been agreed over 6 months ago but now have no idea how a club/public share of the three courts could work, and fear that they may not survive. The Comet reported on these concerns – here.

BDP have suggested that a review of other tennis facilities in the town needs to be included in the decision making process. They seemed open to the possibility of some mini-tennis courts for children and to see if at least one more court could be accommodated. The current plan can change! A suggestion that special funding for tennis facilities can be obtained was noted by BDP for further investigation.

Hitchin Bowls Club has had exclusive use of the Pavilion for many years. The new plans suggest an extension of the Pavilion to accommodate wider usage, for children’s activities and older people, with a mix of community activities and a food kiosk. Toilets remain a must-have component. The possibility of a small pavilion between the current bowls greens was mentioned and seems possible, with the obvious bonus of making the wider use of the old pavilion a reality.

What seems not to have been explored further is whether the Council can offer some replacement parking arrangement for the Bowls Club (and other park users) – their current space has been ruled out of any future layout, and the adjoining public car park is often full on match days. If they lose their current parking arrangement and it is not replaced they could also cease to function – visiting teams, often comprised of older people who cannot carry bowls long distances, would cancel fixtures and the club would fold.

The design of the play area, adjoining the river but with no barrier between, frightened some. The  prospect of dogs being able to enter the play area also raised concerns. However BDP talked about their experience in designing other similar sites and they sought to reassure the audience. The water play/feature also attracted comment. It is seen as very desirable, but a word of warning was sounded about the maintenance problems and how some high profile water features have been left high and dry due to technical problems. Again BDP sought to reassure about the improving design of such features.

An emerging theme was that while many people have talked about the desire to replicate the water play at Howard Gardens, which is understandably popular, the Bancroft site is different and much smaller and the plans need to focus on what is suitable here, not just on how to copy our neighbour.

The concept of a multi user games area (MUGA) on this site was questioned. Other local MUGAs have a high fence around, with noisy and vigorous soccer and basketball participants. The original ‘masterplan’ that NHDC produced envisaged combining this with tennis, a prospect not supported by most. BDP has suggested an unfenced area without the confusing ground markings of several sports courts, where gentler and non-segregated games could be played. Again the theme was that these components are in the melting pot, BDP want to hear from residents now, and if the Lottery money is forthcoming, they will be seeking views again after June before finalizing the design.

Overall there was support for the design displayed, with the acceptance that some important issues still need to be sorted out when the second phase of design starts. The issue about the space for public and club tennis is clearly not resolved and there needs to be an urgent examination of that – something that we understand BDP and the Council and the tennis club will be working on.  We hope that the bid for Lottery funds is successful and that further consultation will lead to a final design which gains wide support.

Any feedback to Hitchin Forum can be emailed to admin@hitchinforum.org.uk

Background and an outline of the  issues are here. Since that posting Hitchin Bridge Club have moved to the catholic church hall, but other users of the hall still have an uncertain future.

Further updates on the plans will be on this website. 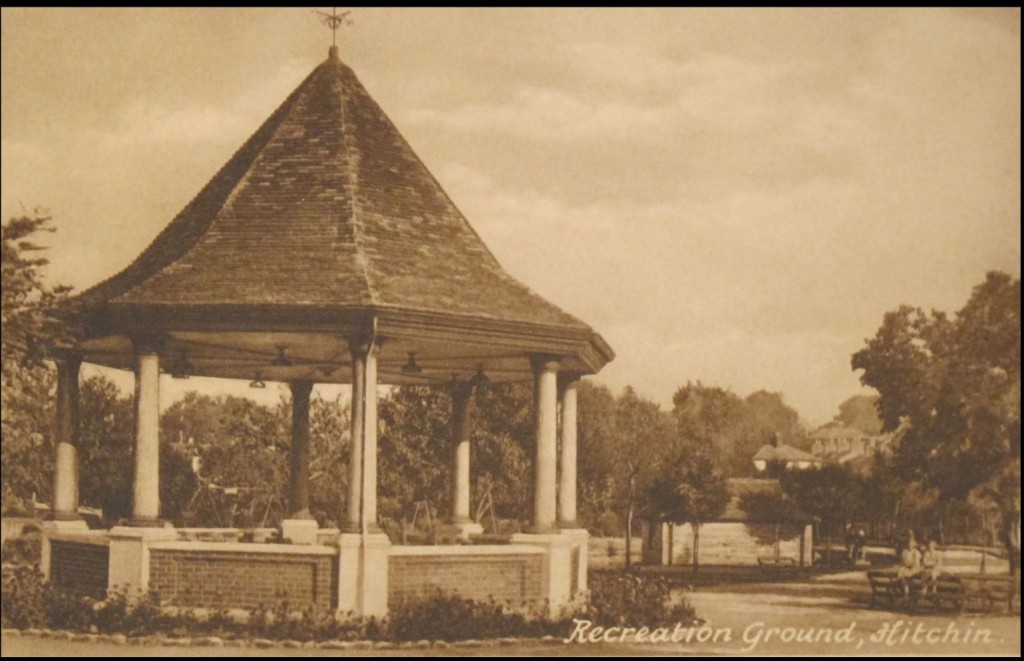