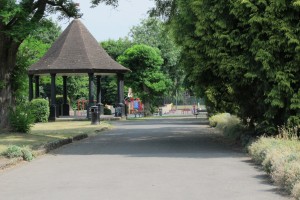 and the failed Lottery bid was reported on to NHDC Cabinet on December 16th, to decide the next step – read report here. The Cabinet decided on an incremental implementation of ideas that had been incorporated into the latest ‘masterplan’, better called design concepts. This was fairly confusing, as the report did not specify which masterplan they were referring to, and the latest one included moving the tennis club away from the river (which won’t happen, though they did not state that exactly). The report seemed to say that consultation had been completed and there was no need to consult with ward members (councillors) or the public again, and that officers could get on with it and need only to consult with the portfolio holder (Cr Jane Gray).
In the public participation the Hitchin Forum chairman spoke on the need for further consultations on the contentious issues – public tennis, bowls club parking, the use of the pavilion – whilst also supporting the plan to get on with a water feature and toilets. The report indicated that consultation with ward members (councillors) and ‘external organizations’ had been done, but it is clearly a mistake for the Council not to be inclusive in all future developments,parly because that is the way the council & the community should operate in the name of localism, but also it is what is expected if Lottery or other grant awarding bodies do expect if they are to fund any part of the hoped-for improvements on the recreation ground .
Councillor David Leal-Bennett added his views, stating “We need democracy and consultation, not autocracy and confrontation”.
Councillor Judi Billing also stated with great force that the Council is “absolutely rubbish at consulting with its members”. She also emphasized the high value that young families in the ward put on having a water play area, having seen what is possible in Letchworth and Baldock.
The tennis club put forward a clear and constructive request for an opportunity to negotiate for a longer lease with the option to increase the number of courts to allow public access and usage, with the hope that club members would be retained and that grants from the Lawn Tennis Association could be applied for.
The portfolio holder, Councillor Jane Gray, was appreciative of the comments and made every effort to say that there would be ongoing discussions with the community as developments were planned. The Leader of the Council also seemed to accept the criticism about consultation and indicated that they would try to do better in future. Good news!