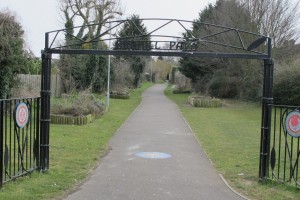 We met and explained that our reasons for wishing to see improvements to Hitchin’s urban footpath network, both in terms of Hitchin’s increasing traffic problems and the health benefits of walking. HCC’s Rights of Way Improvement Plan (RoWIP) focuses on rural paths used largely for recreational walking. We pointed out that improvements to urban paths would be likely to have greater health and environmental impact.
In spite of the job title the Countryside Access Officer (CAO) is equally responsible for urban paths, and would be our first point of contact in terms of seeking action on footpath issues. However, it is important to realise the limits of HCC’s responsibilities in footpath maintenance. HCC is responsible for structures (e.g. gates and stiles) surface, and issues such as overhanging trees. Graffiti, fly-tipping and litter are NHDC responsibilities. However the County’s budget is limited and improvements can only be made when appropriate funding becomes available. Armed with a priority list identified locally, decisions on the allocation of such funds as become available may become easier.
The recommendations from our report last year were discussed and used as a basis to propose a number of action points. These were –
– take part in a joint site visit to investigate ways of making the short road section of the HOOP to the east of the Wymondley Road rail bridge safe for pedestrians.
– provide an update on paths surveyed last year with a priority list for action – Footpath problems
– start to progress the idea of footpath wardens via consultation within Hitchin Forum
Longer term, we discussed ways to improve signage and promote use by exploiting the potential to develop walking routes incorporating footpaths and quiet roads (e.g. between local schools).
Footpath Wardens
One of the suggestions in our original report involved volunteers (Footpath Wardens) taking responsibility for a number of paths to keep an eye on various issues such as damage, fly-tipping and over-hanging vegetation. Some of these issues are HCC responsibilities and others are NHDC’s. From the HCC point of view the officer is happy to work with us on this.
What would the wardens do?
If people volunteer we would like to know what they think they can realistically do.
Possibilities include
• Walking a set of local paths regularly.
• Notifying us or council officers direct of issues (NHDC have forms to report fly-tipping, abandoned vehicles, graffiti and dog fouling).
• Clearing small items of litter and weeds (HF could provide bags and disposable gloves)
If you are interested in helping to improve our paths, we would be grateful if you could answer a few questions (below) and send your responses to us at footpaths@hitchinforum.org.uk
Questions
1. Which paths would you be prepared to keep an eye on? (please either use their names or number on the Definitive Map –
2. How often would you be prepared to walk your local paths?
3. Would you prefer to notify HCC / NHDC directly, or to notify us so there is a single point of contact?
4. Given disposable gloves and bags
• Would you be prepared to clear litter?
• Would you be prepared to clear weeds?
5. Do you have any further suggestions?

To volunteer or let us know if you have spotted any footpath problems please contact us on footpaths@hitchinforum.org.uk
We look forward to hearing from you.
Bill Sellicks