Butts Close, King George’s playing fields and part of the Poets’ estate were just some of the places given a makeover in Hitchin Forum’s Big Autumn Clean-up on Sunday 18th October. 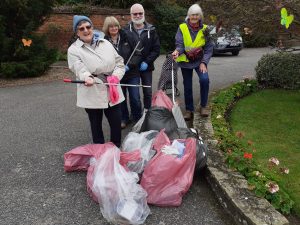 We were delighted with the turn-out, especially since the event had to be a scaled-down version of its former self due to coronavirus restrictions.  People who signed up were amazingly tolerant of the number and detail of the email messages that were flying around (not least the coronavirus-specific risk assessment) and came out on the day to do a brilliant job in spite of everything.  There was a great spirit, and I think everybody enjoyed themselves, despite social distancing and being restricted by the rule of 6.  At the five main collection points, we collected 23 bags of recycling and 56 bags of general waste. 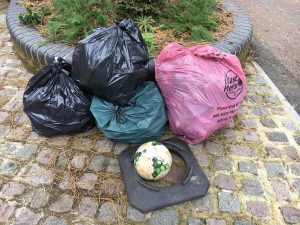 Over 10 more bags were taken home to put in domestic bins.  Special mention should go to the Holy Saviour Guides who did a fantastic job on the Dell, long one of Hitchin’s most popular sites for those who are unable to find a bin for their packaging.  There was the usual range of ‘finds’ – sofas, a car wheel, and unusually, probably a first, an amplifier.  There was also one lost child, happily restored to her parents before they had noticed that she had wandered off.

Obviously, we had to tighten the instructions and restrict where people might normally pick litter, which was a shame – several people were disappointed that the Council wouldn’t support the collection of rubbish from the verges of the bypass, for example.  People even had to be given appointments to collect and return their litter pickers so they didn’t all arrive at the same time. 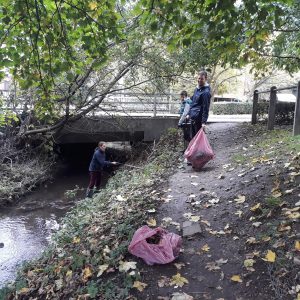 Our six-monthly litter picks have become increasingly popular in recent years.  We were disappointed to have to cancel the spring event back in March, especially as we had over 200 people who wanted to be involved.  This time we had nearly 120 people taking part in over 30 teams.  We are very grateful to all of them, but also to those who supported the event – especially North Hertfordshire District Council for their advice, and Hitchin Initiative for storing equipment and providing us with a distribution point when people came to collect it.  I think we made a difference.  We hope that we will be back to our normal format in the spring.

The event itself spawned at least 4 enquiries from people who had not taken part this time but want to do so in the future.  For those who would like to take part in future events, we would like to hear from you.  Please email us to register your interest for the next event, likely to be in March 2021, at hflitterpick@gmail.com. 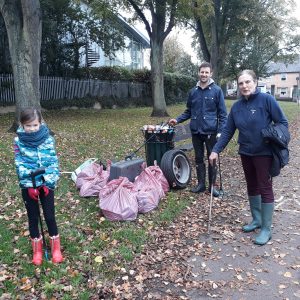